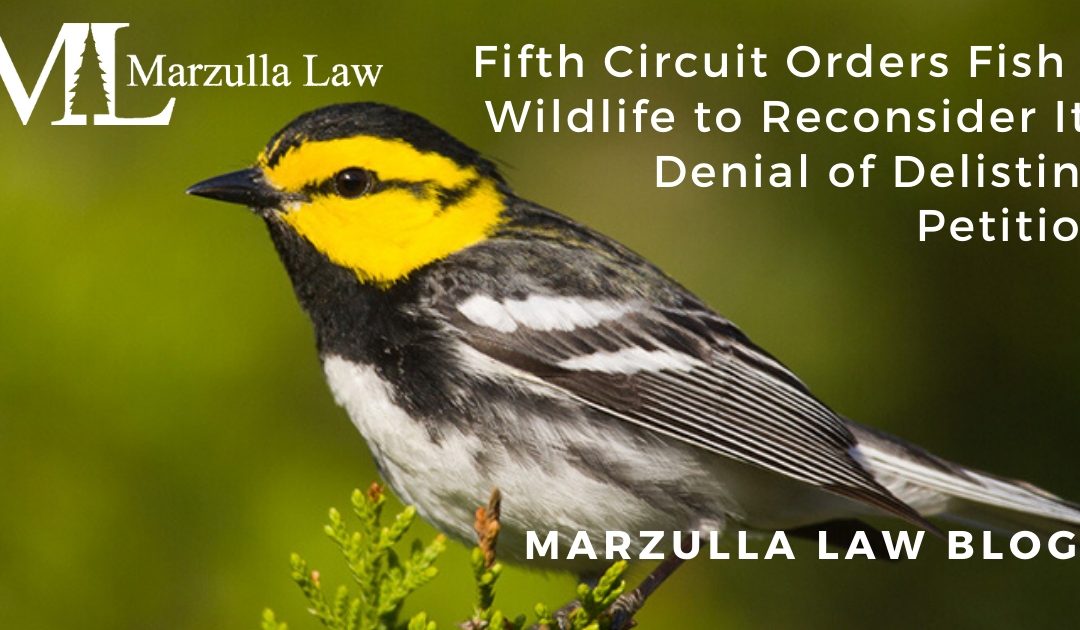 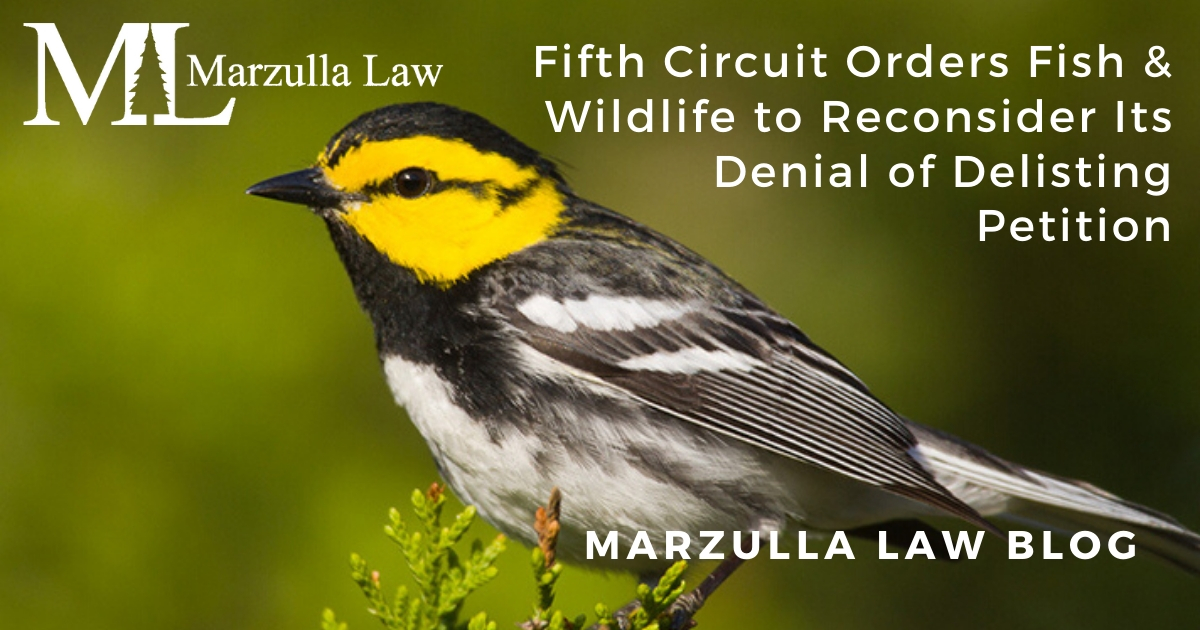 The U.S. Court of Appeals for the Fifth Circuit has ordered the Fish & Wildlife Service to reconsider its rejection of a petition to remove the Texas golden-cheeked warbler from the endangered species list, holding that FWS’s decision was arbitrary and capricious. In 1990 Fish & Wildlife had emergency-listed the golden-cheeked warbler, a songbird that breeds in Texas and winters in Central America, in response to a citizen’s concern that housing growth in the Austin area affecting the warbler’s mature ash juniper habitat.

Twenty-six years later, in 2016, Marzulla Law represented a coalition of citizens groups that petitioned Fish & Wildlife to remove the warbler from the endangered species list, citing recent scientific studies showing that the agency’s original data was inaccurate and did not satisfy the statutory listing criteria under the Endangered Species Act.

On May 4, 1990, the U.S. Fish and Wildlife Service (FWS) listed the golden-cheeked warbler (Setophaga chrysoparia) as endangered on an emergency basis, erroneously believing that the species was rare and that its best breeding habitat was primarily limited to Travis County, Texas.  FWS relied on the only available studies of the golden-cheeked warbler, which were based on ten-year-old satellite mapping using the relatively primitive technology then available, and a fourteen-year-old study of warbler density that underestimated the extent of warbler habitat and the size of the warbler population.

The science that prompted FWS to list the warbler in 1990 was inaccurate, and current studies show that the warbler’s continued listing is neither scientifically sound nor warranted by the listing criteria under the Endangered Species Act.

The Petition to Delist is available at https://ecos.fws.gov/docs/petitions/90100/578.pdf.

But Fish & Wildlife flatly rejected the delisting petition, and the Texas General Land Office sued. On January 15, 2020, the Fifth Circuit reversed both the trial court and Fish & Wildlife Service, setting aside the Service’s 2016 decision and remanding the petition for further consideration by the agency. The court held that Fish & Wildlife had applied “an unnecessarily stringent evidentiary standard” to the Petition, and therefore now had to conduct an in-depth review of the warbler’s status because the Petition presented “substantial scientific or commercial information indicating that the petitioned action may be warranted.” The Fifth Circuit further explained that Fish & Wildlife’s rejection of the Delisting Petition because it already had the studies cited in the Petition was contrary to the statutory standard specified in the Endangered Species Act.

The Fifth Circuit’s decision is here.