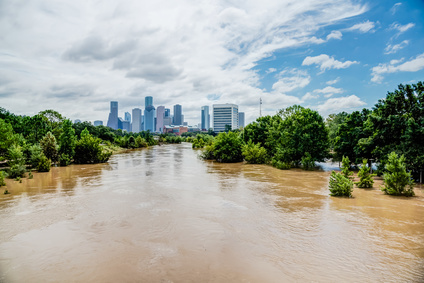 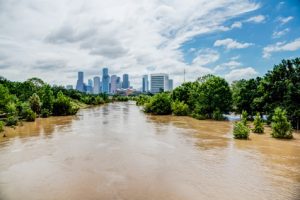 On August 25, 2017, Hurricane Harvey hit Texas shores, affecting an estimated 13 million people in Texas alone, as well as people living in Louisiana, Mississippi, Tennessee, and Kentucky. Two feet of rain was reported as falling in the first 24 hours alone and by September 1, 2017, one-third of Houston was underwater—51.88 inches of which was rainfall from Harvey.

On the evening of August 25th, the U.S. Army Corps of Engineers announced that it would begin controlled releases at the Addicks and Barker dams surrounding West Houston, which are two massive reservoirs west of the city. The purpose of these controlled releases was to avoid flooding homes upstream from the reservoirs. However, with water rising more rapidly than expected, causing flooding behind the dam, the Corps threw open the floodgates at about 1:00 a.m (at a time when many people were sleeping), flooding out all the downstream residents. One homeowner is reported as saying that he awoke when “a muddy wave [of water] blast[ed] open his back French doors.”  The Corps left the floodgates open for nearly a week.

On October 6, 2017, the Chief Judge of the U.S. Court of Federal Claims was in downtown Houston to convene the first of what would become many hearings involving dozens of takings claims filed by the affected downstream residents in Houston who were flooded not by Harvey, but by actions taken by the U.S. Army Corps of Engineers. As of early October, 80 takings lawsuits had been filed in the Court of Claims, seeking just compensation in the range of $10 billion for the taking (inverse condemnation) of their homes, businesses, and property. Today there have been a couple hundred cases filed.

In re Addicks and Barker (Texas) Flood-Control Reservoirs:

On December 4, 2012, Justice Ginsburg, writing for the U.S. Supreme Court, issued a decision holding that government-induced flooding temporary in duration can trigger the Government’s obligation to pay just compensation for a taking. [Arkansas Game and Fish Com’n v. United States, 568 U.S. 23 (2012)]  This decision will play a large role in the Court of Federal Claim’s analysis of the takings claims arising out of the Harvey flooding taking cases now pending.  In that case, the Court concluded that the Government’s flooding of Arkansas Game’s property was foreseeable and the interference with its property was severe:  “The Commission has been deprived of the customary use of the Management Area as a forest and wildlife preserve, as the bottomland hardwood forest turned, over time, into a ‘headwater swamp.’”

What role does foreseeability of the Government’s action play in the Court’s determination whether a flooding is a taking or merely a tort?

The Arkansas Game and Fish Commission court made clear that foreseeability of the Government’s action was a pivotal issue in determining whether a compensable taking had occurred in the instance of Government flooding. The Court explained that there was no taking liability if the damage caused could not have been foreseen.

Another flooding case arising out of Hurricane Katrina was recently argued in the U.S. Court of Appeals for the Federal Circuit. [St. Bernard Parish Gov’t v. United States, 121 Fed. Cl. 687 (2015).] The Court of Federal Claims judge held that the Government was liable for a taking in that case. The Government appealed that decision, and a ruling by the Federal Circuit is expected by this summer.