Justice Kennedy: Takings in the Balance 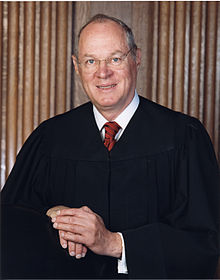 Associate Justice of the Supreme Court of the United States: Anthony Kennedy. Photo courtesy of Wikipedia

When Justice Kennedy joined the Supreme Court in 1988, the Court had only begun to grapple with the takings implications of federal regulatory schemes on private property. At that time, the test was quite rudimentary for determining when the Fifth Amendment’s requirement that “nor shall private property be taken, without just compensation,” applied and it gave little guidance to trial courts. Under the leading cases of Pennsylvania Coal Company v. Mahon and Penn Central Transportation v. New York City, judges were told simply to look at the totality of the circumstances to determine if a regulation had “gone too far” and thus violated the Fifth Amendment’s Takings Clause.

Soon after Kennedy joined the Court, however, takings jurisprudence began to take on more definite contours as the Court started to draw lines that the lower courts could apply with greater certainty. In the landmark case of Lucas v. South Carolina Coastal Council, for instance, Justice Kennedy joined Justice Scalia’s majority opinion in which the Court announced a newly formulated per se taking rule. In Lucas, the Court held that if a regulation took all the economically beneficial and productive use of land, that action would be recognized as a taking without regard to other factors.

During his tenure on the Court, Justice Kennedy voted with the majority in 16 key takings cases, including:

In the decisions he authored, Justice Kennedy further revealed himself as a vigorous advocate for Fifth Amendment protections. In City of Monterey v. Del Monte Dunes, Kennedy wrote the majority decision holding that takings plaintiffs were entitled to a jury trial on the just compensation issue in a challenge brought under 42 U.S.C. § 1983 (deprivation of constitutional rights under color of state law). He explained that the right to jury trial under the Seventh Amendment attached when the remedy was legal in nature. And the Justice concluded that just compensation is a legal remedy because in a taking case, “the question is what has the owner lost, not what has the taker gained.”

In Palazzolo v. Rhode Island, a wetland taking case, joined by four other justices, Kennedy held that the Rhode Island Supreme Court had erred in holding that Palazzolo could not challenge the regulation as a taking because he acquired title to the land with notice of the regulations. Rejecting what he described Rhode Island’s “sweeping rule” barring later purchasers from challenging land-use restrictions as a taking, Kennedy wrote:

Were the Court to accept that rule, the postenactment transfer of title would absolve the State of its obligation to defend any action restricting land use, no matter how extreme or unreasonable. A State would be allowed, in effect, to put an expiration date on the Takings Clause. This ought not to be the rule. Future generations, too, have a right to challenge unreasonable limitations on the use and value of land.

In Kennedy’s final taking case on the Court, Murr v. Wisconsin, the Court addressed the nettlesome problem that had stumped courts for years—how to determine the denominator or relevant parcel in a taking analysis. In Murr, the plaintiffs owned contiguous lots, one of which they planned to sell and use the proceeds to develop the other. In analyzing both lots as a single parcel for takings analysis, and holding that the Murrs had not suffered a taking, Kennedy summed up his core belief about the Fifth Amendment and its role in balancing public burdens against private harms:

Like the ultimate question whether a regulation has gone too far, the question of the proper parcel in regulatory takings cases cannot be solved by any simple test. See Arkansas Game and Fish Comm’n v. United States, 568 U.S. 23, 31, 133 S. Ct. 511, 184 L. Ed. 2d 417 (2012). Courts must instead define the parcel in a manner that reflects reasonable expectations about the property. Courts must strive for consistency with the central purpose of the Takings Clause: to “bar Government from forcing some people alone to bear public burdens which, in all fairness and justice, should be borne by the public as a whole.” Armstrong, 364 U.S. at 49, 80 S. Ct. 1563. Treating the lot in question as a single parcel is legitimate for purposes of this takings inquiry, and this supports the conclusion that no regulatory taking occurred here.

Supreme Court nominees have a way of charting their own courses once they take their seats on the Court. Justice Kennedy was not, at the time of his appointment, perceived as the key swing vote on Fifth Amendment just compensation cases (nor on other key issues for that matter). The person who replaces him may or may not be influential on takings issues—and any one of the nine could turn out to be the new swing vote.

Author: Nancie G. Marzulla
Nancie G. Marzulla is an attorney in Washington, D.C. whose practice focuses on Fifth Amendment takings cases, property rights, and environmental claims. She has participated in virtually all of the landmark takings claims in the Supreme Court.

© 2016. Published in The Business Lawyer, Vol. 71, No. 4, Fall 2016, by the American Bar Association. Reproduced with permission. All rights reserved. This information or any portion thereof may not be copied or disseminated in any form or by any means or stored in an electronic database or retrieval system without the express written consent of the American Bar Association or the copyright holder.