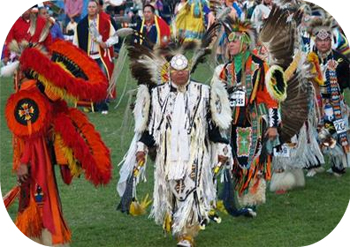 For over four centuries the original inhabitants of the region where the Arkansas and Mississippi Rivers meet — the people known as the Quapaw (O-Gah-Pah), or the “Downstream People” — have endured unending hardships, abuses, and inequities. In the 1600s and 1700s, when Europeans arrived, their population was decimated by disease. As American interests moved westward during the 1800s, the Quapaw suffered forced relocations, prejudice, and even starvation. After their reservation in northeastern Oklahoma was devastated during the Civil War, they were forced to cede and sell more of their land to the U.S. government for reconstruction funds so as to restore living conditions. Finally, as the 20th century approached, pressure from the U.S. government forced the Quapaw Nation to self-allot the land within its reservation to individual members of the Tribe in order to ensure the lands remained in Quapaw hands.

In January 2011, nine individual members of the Quapaw Tribe, each of whom are successors-in-interest to tribal allotments, filed a class action breach of trust lawsuit on behalf of individual tribal members against the U.S. government in the U.S. Court of Federal Claims. The lawsuit, Goodeagle vs. United States (named for Grace M. Goodeagle, the first-named of the nine Plaintiffs) claims that the government breached its fiduciary duty by mismanaging amounts due from property leases, permits, and agreements; mismanaging Tribal members’ Individual Indian Money Accounts, trust accounts, and other monetary assets; mismanaging natural resources; among other breaches.

However, the government’s expansive view of an April 2011 Supreme Court ruling on an entirely separate and unrelated case now threatens potentially devastating effects on the Goodeagle case and the ability of the Quapaw Tribal members to obtain any relief.

The Tohono Decision, the Cobell Settlement, and the Government’s Motion to Dismiss Goodeagle

Now pending in the U.S. District Court for the District of Columbia is a massive nationwide lawsuit on behalf of more than a million Native Americans.  The case, Cobell v. United States, has been pending for over 15 years.  Congress has now approved a settlement of that case that would provide some Native Americans — including members of the Quapaw Tribe — far less than they are entitled to.  For that reason, Goodeagle and 1,080 other members of the Quapaw Tribe have asked the district court to exclude them from the case so they can pursue their existing lawsuit.

But now the Government has filed a motion to dismiss the Goodeagle case claiming that the court “lacked subject-matter jurisdiction” because Cobell asserts the same claims for all Native Americans—-even though Goodeagle and more than a thousand Quapaw do not want to participate in the Cobell case. More specifically, the Government’s motion states that:

The Government’s motion to dismiss the Goodeagle lawsuit is based on an expansive reading of Section 1500 in the Tohono decision and has nothing to do with the merits of the Goodeagle lawsuit.  The Government argues that members of the Quapaw Tribe are also members of two settlement classes that have been certified by the District Court in Cobell v. Salazar. Both Cobell and Goodeagle, according to the Government, are based on the same operative facts, and thus 28 U.S.C. § 1500 requires that the Goodeagle lawsuit be dismissed.  Never mind that no Quapaw filed the Cobell case, and that the Goodeagle Plaintiffs want nothing to do with it. Fearing that any potential claims might be extinguished by the Cobell settlement, over 1,080 tribal members filed opt-out forms with the Cobell administrator and expressed interest in participating in the Goodeagle case if claims attributable to their family have survived.

The Goodeagle case is far from over. Nancie Marzulla, counsel for Quapaw Tribal members in the Goodeagle litigation, explains that “the Goodeagle Plaintiffs exercised their right to opt out of the Cobell settlement. Section 1500 has no logical application to the Goodeagle situation.  There is likewise no good reason why people who didn’t want to be members of another lawsuit should be deprived of their right to seek relief in the Court of Federal Claims. ”

The Implications For The Quapaw Nation

The Quapaw people have a rich culture whose heritage hails them as remarkable agriculturalists, and wholly inoffensive and peaceable. Their heritage now sadly includes a centuries-long struggle of endurance against continuing injuries and injustices at the hands of the American government. For their steadfastness they deserve our honor. But more importantly, they deserve the justice that is owed to them.

“If Goodeagle is dismissed, the Quapaw Tribal members will be robbed of their ability to have a remedy for decades of federal government mismanagement of their lands, mineral rights, and money accounts,” says Nancie Marzulla, the attorney representing Goodeagle.  “Congress approved the Cobell settlement, which allocates a small payment for each individual class member, far less than the Quapaw tribal members’ damages should be. The Quapaw had extremely valuable mineral rights, which is why they tried to opt out of the Cobell class and filed their own lawsuit.”

John L. Berrey, Chairman of the Quapaw Tribe, put it this way:  “The Goodeagle case stands for more than just a monetary settlement for the Quapaw people—-it is an inherent part of restoring the dignity that almost 100 years of [federal government] mismanagement of our property has taken from us.”