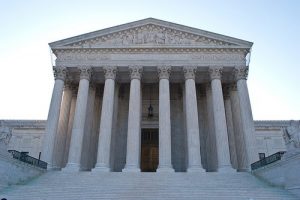 On April 2, 2012, the Supreme Court granted the petition for certiorari filed by the Arkansas Game & Fish Commission, seeking review of a decision by the U.S. Court of Appeals for the Federal Circuit. In that decision, the circuit panel reversed a trial court’s ruling that the U.S. Army Corps of Engineers’ flooding of state-owned property from 1993 to 1999 constituted a temporary taking of a flowage easement over the property. The Federal Circuit held that because the flooding was not permanent, no taking had occurred. In denying rehearing and rehearing en banc, several judges on the Federal Circuit hotly disagreed, stating that the temporary flooding was sufficient to trigger the duty to pay just compensation for a taking. Other judges raised the issue that if the flooding was not a compensable taking, then the case should be analyzed as a tort.

The Supreme Court granted the petition to review this case because the Court is interested in (a) flooding, (b) claim accrual, (c) temporary takings, (d) all of the above, or (e) none of the above.

The right answer is anybody’s guess. But one thing is certain-this case could put into play crucially important issues for landowners in what could be the next blockbuster takings decision.Briefing in the case will take place over the summer, and it will be argued early next fall. Stay tuned.

Clearwater Lake and Dam in Missouri on the Black River

In 1993 through December 1, 2000, the Corps adopted a number of deviations from the releases outlined in the Control Manual, the purpose of which was to slow down releases to allow farmers more time to grow their crops. These deviations changed the timing and amounts of water releases from the Lake. The unfortunate result of these changes or deviations was that the subsurface water table rose, causing flooding in the Donaldson/Black River Wildlife Management Area, which is located down river in Arkansas.

Finally, in 2001, following repeated requests by the Arkansas Game & Fish Commission, the Corps decided to go back to its original plan of operations under the 1953 Control Manual.

In 2005, the Arkansas Game & Fish Commission sued the United States for the uncompensated taking of a flowage easement and timber damage in the Wildlife Management Area. Because of the increased flooding, the soils in the wildlife management area became saturated, many areas became dominated by wetland plants, and many trees developed root rot and were damaged or weakened and died. The end result was the loss of valuable hardwood timber owned by the Wildlife Management Area and loss of wildlife habitat for water fowl associated with recreational hunting.

The U.S. Court of Federal Claims held the federal government liable for a temporary taking, awarding damages of $5.7 million

The trial judge ruled in favor of the Commission, holding that “the inundations during growing seasons from 1993 through 1999 were recurrent and constituted an appropriation [of a flowage easement], albeit a temporary rather than permanent one because the Corps terminated its deviations.”

The Federal Circuit reversed this trial court’s decision, holding that the flooding was too temporary to be a taking

On appeal, a divided panel (2-1) reversed the trial court’s decision, holding that the flooding was not sufficiently permanent to rise to the level of a taking-temporary or otherwise. Rather, the majority focused on the two bookends of the takings analysis. On the one end, there is one flood, which is generally not seen as a taking, rather it is at best a tort. And at the other end there are the permanent, inevitable floodings, which generally are recognized as permanent takings. In this case, the Federal Circuit reasoned, there were no permanent floodings, so no taking had occurred. But as the dissent pointed out, what happened to the trial court’s conclusion that a temporary taking had occurred? The majority did not explain why a temporary taking claim had not accrued, nor explain if the case should have been analyzed as a tort.

The Commission asked for rehearing and rehearing en banc; the petition was denied.The panel again stated that there was no taking because “[t]he United States Army Corps of Engineers (“Corps”) made a series of ad hoc and independent decisions to deviate from the normal release rates at a dam in Missouri, which sometimes caused intermittent flooding on the plaintiff’s property.” The panel also rejected the idea that the panel had created an exception from standard takings law for flooding cases.

Three judges dissented from the denial of rehearing en banc. One judge stated that the panel’s decision created a bar to relief for any temporary takings claim.

The petition for certiorari and issue certified for review:

Whether government actions that impose recurring flood invasions must continue permanently to take property with the meaning of the Just Compensation Clause of the Fifth Amendment?

On June 22, 2012, Arkansas Game & Fish Commission’s brief will be due in the Supreme Court. The Government’s brief is due August 24, 2012. The Supreme Court will hear argument in the case next fall, and render its decision by the end of the year, or early next year.