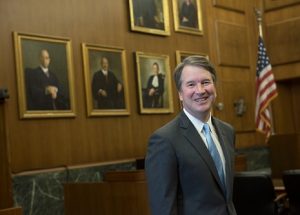 On July 9, 2018, President Trump nominated D.C. Circuit Judge Brett Kavanaugh to serve as a justice on the U.S. Supreme Court. His twelve-year record on the D.C. Circuit gives us some insight into what we can expect if he is confirmed. His analysis and review of agency decision-making in an appeal involving the San Diego fairy shrimp is a case in point.

In 2011, as a member of a three-judge panel, Judge Kavanaugh heard the appeal of a district court’s decision upholding the U.S. Fish and Wildlife Service’s designation of 143 acres of privately owned land as critical habitat for the San Diego fairy shrimp (an issue discussed in this newsletter in prior publications). The D.C. Circuit reversed in an opinion authored by Judge Kavanaugh, in which he noted that the Fish and Wildlife Service had based its critical habitat designation on a “single 2001 sighting of four ant-sized San Diego fairy shrimp on the 143 acres of plaintiffs’ property,” and that the fairy shrimp “were observed in a tire rut…”

Recognizing that designation of private property as critical habitat can impose significant costs on the landowners—as it had imposed on the Plaintiffs in the case before him–Kavanaugh wrote:

Designation of private property as critical habitat can impose significant costs on landowners because federal agencies may not authorize, fund, or carry out actions that are likely to “result in the destruction or adverse modification” of critical habitat.

In framing the legal issue before the court, Kavanaugh stated that the case turned on whether “substantial evidence supports the Fish and Wildlife Service’s determination that plaintiffs’ land was occupied by the San Diego fairy shrimp at the time of listing in 1997.”  The Government argued that the court should affirm the district court’s decision, which had been based on deference to the agency rulemaking. And Kavanaugh certainly recognized that substantial evidence is a deferential standard, but he explained that this did not mean that the courts should simply rubber-stamp agency rulemaking. He explained, “deference is not abdication.”  And he noted, the case before the court “illustrates the significance of that distinction.”

Ultimately, Kavanaugh concluded that the Fish and Wildlife Service had not reasonably explained how one, isolated observation of four fairy shrimp (“in a tire rut on a dirt road . . . [that] may not have even existed in 1997”) demonstrates that plaintiffs’ property was “occupied” by the San Diego fairy shrimp in 1997.

Writing for the panel, Judge Kavanaugh therefore reversed the district court’s decision and vacated the agency’s designation of the Plaintiffs’ property as critical habitat for the fairy shrimp.