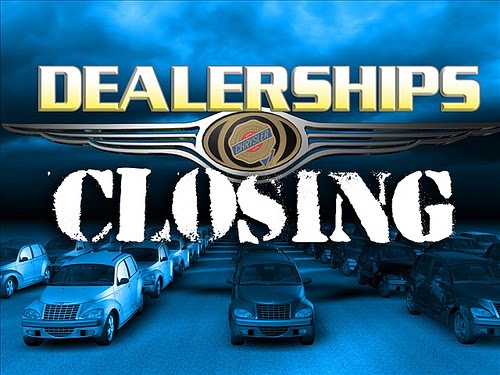 Uncompensated government takings impact lives. This is a sobering truth that tends to become lost in the dizzying maelstrom of legal proceedings that take place in our courts; lost in the necessarily dispassionate and often arid landscape of briefs, motions, oral arguments, and trials.

This story is one of lives affected and livelihoods lost, victims of a government decision borne of a collision of politics and economic crises.

In 2009, 789 Chrysler automobile dealerships were forced to close after the Federal Government determined that Chrysler would be more financially healthy with a smaller dealership network. Therefore, as a condition of receiving any federal relief money under the Troubled Asset Relief Program (TARP), President Obama’s Auto Task Force required Chrysler to enter into bankruptcy and utilize the bankruptcy proceeding to terminate 25% of its dealerships. The stated objective of the closures of 25% of all Chrysler dealership franchises was to promote stability in the U.S. financial system and U.S. markets by preventing a significant disruption of the automotive industry.

Shortly after the termination of the franchise agreements, 75 of the terminated Chrysler dealership owners — many of whom had been in business for generations — filed suit in the U.S. Court of Federal Claims seeking monetary relief for the loss of their businesses, losses which were in fact uncompensated takings of their property in violation of the Fifth Amendment. Marzulla Law is representing these dealership owners.

The events which precipitated the dealership owners’ suit against the government played out before the nation as a whole.

On October 3, 2008, Congress enacted the Emergency Economic Stabilization Act of 2008 (“EESA”) to restore liquidity and stability to the American financial system. Under the EESA, Congress created the Troubled Asset Relief Program (“TARP”), which granted the Secretary of the Treasury broad authority to purchase troubled assets from financial institutions. Specifically, Congress authorized the Secretary of the Treasury “to purchase, and to make and fund commitments to purchase, troubled assets from any financial institution.” Congress funded TARP with approximately $787 billion in federal funds, and gave the President broad powers to disburse the funds.

Although TARP was aimed at financial institutions, the Secretary of the Treasury determined that TARP funds could also be used to aid automobile manufacturers (such as Chrysler) that provided credit to auto purchasers. Shortly after this determination, the Secretary of the Treasury created the Automotive Industry Financing Program to permit the Treasury Department to invest in the automakers and their financing arms with the goal of preventing the mass collapse of the U.S. automotive industry.

In February 2009, after a year of investing billions in TARP funds to assist Chrysler and other major automobile industries, President Obama established the President’s Auto Task Force to oversee the restructuring of Chrysler. The government’s restructuring plan required that Chrysler terminate a substantial number of dealer franchises. In April 2009, Chrysler and its affiliated companies filed a petition for bankruptcy in the District Court for the Southern District of New York, which ultimately issued the Rejection Order terminating 789 dealership franchise agreements.

Terminating the Dealerships’ Contracts Was a Taking

The Government has asserted that the termination of the franchise agreements with the 75 dealership owners does not constitute a taking, specifically because “their purported expectation of a continued dealership relationship with Chrysler — even after the manufacturer became insolvent — never constituted ‘property’ the loss of which could be actionable under the Fifth Amendment,” according to the Government’s motion to dismiss the dealership owners’ complaint. But in Cienega Gardens v. United States, 331 F.3d 1319 (Fed. Cir. 2003), the Federal Circuit held that contracts are property protected against uncompensated taking by the Fifth Amendment. Prior to the Government’s actions, in this case, the 75 dealership owners had valuable franchise agreements with Chrysler and operated valuable dealership businesses by virtue of those agreements.

And in Boise Cascade Corp. v. United States, 296 F.3d 1339 (Fed. Cir. 2002), the Federal Circuit confirmed that if the Government uses the judicial system to take private property for public use, the Government must still pay compensation. In this present matter, the federal Auto Task Force, an agency of the Government, decided that 25% of Chrysler dealerships must be terminated through a bankruptcy proceeding for a public purpose.

It is worth noting that here, too, the Government was advised that requiring the termination of 25% of the Chrysler dealership via bankruptcy would likely result in takings liability.

Steven Rattner, Head of the Auto Task Force, made several statements after he resigned from the Government supporting these allegations. In a magazine article, Rattner observed that the Government would have to resort to the bankruptcy process to trim the dealer network: “I had doubted whether fundamental restructurings could be accomplished outside of bankruptcy.” He further observed that the Government’s “best idea was to employ a little-used part of the bankruptcy code, Section 363, which greatly streamlines the process by allowing a newly formed company to buy the operating assets from the bankrupt entity.”

Then in his book, Overhaul: An Insider’s Account of the Obama Administration’s Emergency Rescue of the Auto Industry, Rattner wrote that the Government chose Bankruptcy Court over legislation after being advised that shortcutting the bankruptcy process might lead to takings liability: “Finally we were advised that efforts to shortcut bankruptcy procedures could well run afoul of the ‘takings clause’ of the U.S. Constitution . . . .”

As a direct result of the Government’s taking, the monetary damages experienced by the dealership owners reaches into the millions of dollars.

Consider two of the closed dealerships’ owners, James Painter of Painter’s Sun Country Chrysler Dodge Jeep, and Mitch Lunt of Lunt Motor Company, both located in southern Utah. Their dealerships have been loyal family-owned Chrysler franchisees for decades, with James Painter’s father opening up his dealership in 1945, and Lunt’s family having sold Chrysler automobiles since the 1930’s.

The closures have been devastating to both their businesses and their livelihoods.

In an August 2009 article in the Spectrum & Daily News in southern Utah, Mitch Lunt said his business dropped fifty percent after his franchise license was terminated.

“By taking out bankruptcy, it gave them a chance to cut our throats,” Lunt said of Chrysler’s government-mandated dealership closures.

Calling the situation a “rotten deal,” Lunt’s company is struggling to stay afloat.

Adding insult to injury, just three months following the bankruptcy and franchise terminations, Chrysler sought to authorize new dealership contracts in southern Utah. However, instead of approaching James Painter or Mitch Lunt, Chrysler signed agreements with another dealer in the same locale.

Stephen Wade, the dealer who accepted the agreement in order to keep the brand local, sympathized deeply with what James Painter and Mitch Lunt have had to endure.

“These people are good people who gave their lives to this for a lot of years, and what happened to them is not right,” Wade said.

The United States Court of Federal Claims recently denied the Government’s motion to dismiss the case. The court agreed with our contention that, contrary to the Government’s contention that the dealership owners are challenging the district court’s bankruptcy decision, the dealership owners are in fact suing the United States Government for the uncompensated taking of their constitutionally protected property rights, which was accomplished via the mechanism of bankruptcy proceedings.

Courts measure damages in dollars. It’s the nature of the system we occupy and work in. And while our clients rightfully seek just compensation for their losses, dollars ultimately can never reflect nor fully heal the deeper human impact, such as was experienced by our clients whose livelihoods were destroyed by the government’s auto bailout.