The Mojave Desert Tortoise Moves In 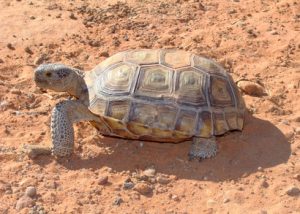 In the 1980s, James Doyle, a successful real estate developer, purchased over 2,440 acres of land in St. George, Utah and invested large amounts of money to plan development that included luxury homes and nine golf courses. In the early 1990s, the U.S. Fish and Wildlife Service listed the Mojave desert tortoise as threatened under the Endangered Species Act, and designated much of Washington County, Utah—including all of Doyle’s land—as critical habitat for the tortoise. To permit development in the rest of the County, the Government created a desert tortoise reserve to use as mitigation for the impacts to the tortoise.

In exchange for his agreement to include his land in the most highly protected area of tortoise habitat—the Red Cliffs Desert Reserve—the federal government promised to purchase or exchange Doyle’s property so that he would incur no financial losses. However, other than 500 acres of land, which the Government agreed to purchase, the Government has failed to provide land or cash for most of Doyle’s property as promised. Doyle now looks to Congress for relief in the form of a Congressional Reference, a process by which Doyle’s claims can be directly referred to the US. Court of Federal Claims for resolution.

In 2004, with his development plans destroyed, and having spent all his money to acquire and obtain permits for developing the land, Doyle was forced into bankruptcy, and was forced to transfer 1,400 acres of his land to creditors. Doyle emerged from bankruptcy retaining only ten percent of his original holdings—which is still in the reserve, used for tortoise habitat, and for which he has never been paid. For the past 20 years during which Doyle cannot sell, exchange, or develop his land, but he has however had to pay state property taxes on this land.

In 2015, Doyle filed a claim for a taking in the U.S. Court of Federal Claims. The Government defended the case, arguing that the case was barred by the statute of limitations—that Doyle had waited too long to bring his claim and that he should have brought the case back when his land was first incorporated in the reserve. But the court rejected that argument because as Doyle pointed out, the Government continued to promise him that they would purchase his land or give him other land that he could develop instead. At the same time, the Government argued that Doyle’s claim was premature because he had not applied for and been denied a permit from the Fish and Wildlife Service to develop the land. Doyle explained that he could not apply for a permit because the land was already included in a County-wide Habitat Conservation Plan. But the court disagreed, and on November 30, 2016, the Court dismissed his claim without prejudice, holding that Doyle’s claim was not ripe. According to the trial court, Doyle must seek to have his land removed from the reserve, and then start all over with a new application for an incidental take permit—a process that could take five years or more—be denied for the permit, and then file a new taking case.

Utah Republican Sens. Orrin Hatch and Mike Lee have recently stepped in to introduce a bill designed to provide Doyle with an opportunity to have his day in court. Under S. 2531, the “Red Cliffs Desert Reserve Completion Act,” the U.S. Court of Federal Claims would have jurisdiction over Doyle’s claims, and would be asked by Congress to determine an award based on “any damages and losses sustained … by reason of the Federal Government’s taking of approximately 2,000 acres of his land.”