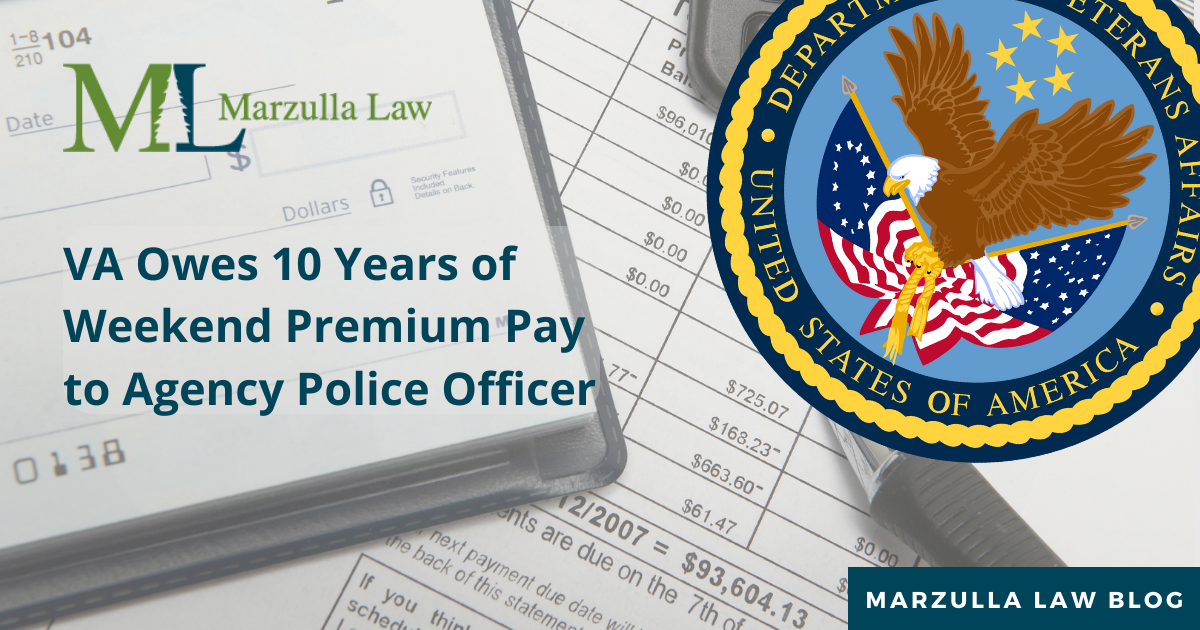 The U.S. Court of Federal Claims recently held that the Department of Veterans Affairs must pay an agency police officer and all similarly situated VA employees 10 years’ worth of back weekend or premium pay.

In 1986, Carl Robert Carson, Jr. began his career as a police officer for the Department of Veterans Affairs. He served as a police officer at the VA for 34 years, until his retirement. From 2002, he was a supervisory police officer. Based on  arbitrations between VA and the American Federation of Government Employees, the VA issued a Human Resources Management Letter and updated its Handbook to include occupations entitled to weekend premium pay equal to 25% of the employee’s basic hourly rate of pay, which included Carson’s supervisory position.

But on January 18, 2018, the VA Office of Human Resources Management issued a bulletin that purported to remove certain positions from eligibility for weekend premium pay, including Carson’s position.

On December 11, 2018, Carson sued the VA to recover retroactive weekend premium pay for a 10-year period, between January 11, 2004 and July 13, 2014. Following discovery, the Government moved to dismiss under Rule 12(b)(1) arguing that Carson’s claims accrued before December 11, 2012 and were therefore time-barred. The parties also cross-moved for summary judgment.

The Court also granted Carson’s motion for partial summary judgment on his claims, holding that Carson was entitled to summary judgment for all claims. In ruling for Carson, the Court rejected the Government’s attempts to take a position in the litigation contrary to what the Government had argued in earlier proceedings:

[T]he Court finds that the government, having successfully argued a contrary position in a previous legal proceedings, is judicially estopped from arguing that section 7454(b)(3) alone entitled Plaintiff to weekend premium pay.

The Court further explained why it would not permit the Government to reverse its position in this litigation to “suit its present purposes”:

[U]nder the government’s litigation position before this Court, Plaintiff was always eligible for premium pay with no eligibility determination by the VA needed, meaning the vast majority of [Carson’s] claims long ago accrued and are not time-barred. This is just the type of strategic inconsistency judicial estoppel is designed to prevent.